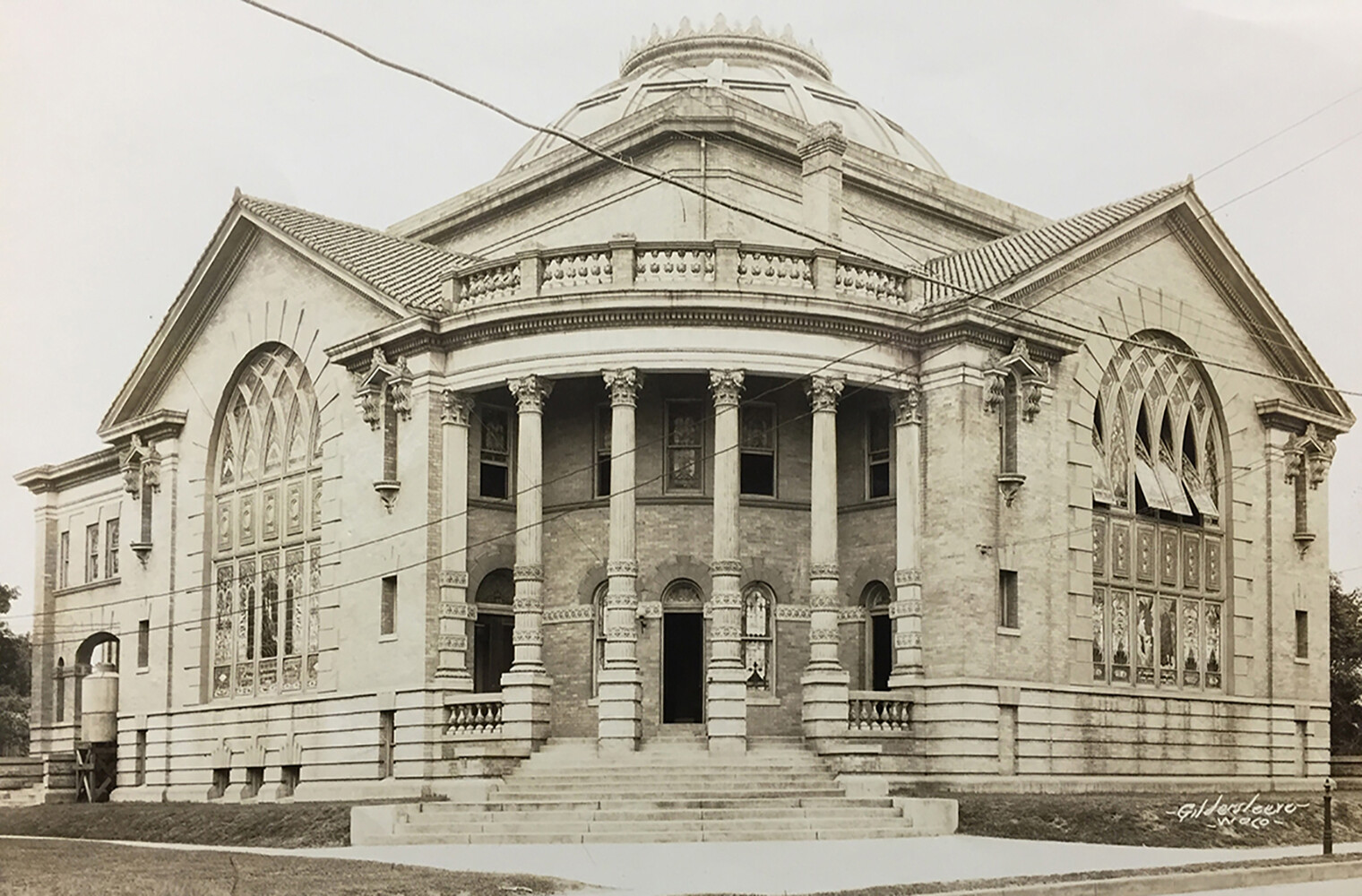 We have a rich history here at First Baptist Church Waco. Started in 1851, we've seen a thing or two over the years. What has remained the same is our faith in God's perfect vision for our church and city. We have deep roots in Waco and embrace the traditions that have formed our culture for over 150 years, while at the same time not losing sight of what is important for our present and future growth.

1851 – In the newly surveyed Waco Village, James C. Johnson, Noah Woods, George T. Holman, and Matilda Johnson, with the aid of Baptist missionary Noah T. Byars, charter the First Baptist Church of Waco. Rev. Byars immediately answers their call to pastor the new church. The Baptists are invited to meet one Sunday and the preceding Saturday each month in the log cabin Methodist Church located at 2nd and Jackson streets. By 1854, FBC Waco, under the leadership of its second pastor S.G. O’Bryan, has sponsored another new church, Bosque Baptist Church of Christ (now Bosqueville Baptist Church), chartered by eight members, most of whom were FBC Waco members. O’Bryan also leads a fund drive to construct a new brick church building erected at the corner of 4th and Mary streets. This allows the church to host the newly organized Trinity River High School, a project of the Trinity River Baptist Association. It also allows FBC Waco to hold a 17-day revival that adds 67 members to the church rolls, and in 1859 to host the Baptist State Convention. For this grand affair, the Methodists again step up and accommodate the overflow crowd.

The Civil War years create enormous challenges for the church. Pastor Rufus C. Burleson, in addition to his duties as president of Waco University, takes time off to serve as a chaplain in the Confederate Army. Finally, at war’s end, men return to the congregation and the church begins to rebuild its efforts to serve in the Waco community. 105 freed slaves, members of the FBC Waco congregation, come before the church and ask for letters of dismissal so they can start new churches. The letters are granted and Rev. Burleson and the FBC congregation assist 18 of those former members in the chartering of New Hope Baptist Church. In 1870, the church hosts the organizational meeting of the Waco Baptist Association, and the next year establishes the staff position of city missionary.

B.H. Carroll answers the call to pastor the church in 1871, beginning a 28-year tenure at FBC Waco. Five years later, he organizes a revival that will last 81 days and add 303 members to the congregation.  By this time, Baylor University has moved to Waco and merged with Waco University. Dr. Carroll creates the Baylor Bible Department which will become Southwestern Theological Seminary. Later, the church building burns to the ground. Only the organ and furniture are saved. It takes three years to construct the new building on the same site. Two more churches are chartered with the sponsorship of FBC Waco, the 2nd Waco Baptist Church aided by city missionary V.G. Cunningham and the First German Baptist Church, established as a mission of FBC Waco by Rufus Burleson. FBC Waco also sends it first international missionaries, Dr. W.B. and Anne Luther Bagby and Dr. Z.C. Taylor to Brazil. In 1901, Annie Jenkins will enter missionary training in Chicago, preparing her for work in China.

The early 1900s saw growth and progress in Waco, but one result is perceived as a detriment to the FBC congregation as they were continually inundated with the noise of the increased railway traffic. In 1907, they move into a new church building, constructed at the intersection of 5th and Webster streets. The church continues to thrive, especially under the leadership of Dr. J.M. Dawson, called in 1915 and serving until 1946. By the end of his tenure, the church staff members include missionaries to Uruguay, Nigeria, Yugoslavia, Argentina, and Chile. Additional mission posts are privately funded by FBC church members.

The pastors who follow Dr. Dawson include evangelists, Old Testament scholars, and the Rev. Peter McLeod, a Scotsman who will create the first college and singles ministries for the church. They continue in the tradition of generous hospitality by instituting a neighborhood sewing ministry, an Hispanic Mission, adopting a Vietnamese family, supporting international missionaries on leave in the United States, and joining the Meals on Wheels food program. In 1981, Dr. John A. Wood recognized for his hospitality, often opening his home to various groups in the congregation, begins his pastorate. He immediately institutes a television ministry and within three years the church begins preparations to house a Vietnamese congregation and a local apartment ministry is established. The church births another private school. Waco Baptist Academy leases space as it organizes and begins classes as it searches for a permanent campus. In 1993, Scott Walker assumes the position of pastor and FBC Waco finds room for Korean and Chinese worship groups. George Truett Theological Seminary also gets its start at 5th & Webster until its facility on the Baylor Campus can be funded and built. Mission groups are sent out to Prague in the Czech Republic, Mexico, Guatemala, and Canada. Local ministries include service at the Gospel Café and hosting an Agape meal, youth sports programs for both members and neighborhood children.